İrfan Önürmen plumbs the intricacies of existence with a postmodern process-oriented painting strategy that fuses a cartoon drawing aesthetic, tulle collage, and cubist planar construction; effectively obscuring formal classification and raising more questions than it answers. His past show at C24 Gallery persistently mines the many shades and guises of the human condition in subtle works that span sculpture, portraits, subconsciously focused paintings, paintings based on imagery culled from Instagram, and more. The absence of vibrant hues reinforces the enigmatic impression that the paintings are imbued with vague memories or undefined dream states. Önürmen’s knack for evoking ambivalence sets his art apart from the narrative strain that characterizes current painting trends. His innovative methods compel the audience to apprehend the visual material from a fresh, unfamiliar viewpoint.

In the Gaze Series, the out-sized proportions of female heads represent the entire body and personality of each subject. They span youth to maturity in a shattering psychological series that pivots from an untroubled girlish visage to a progression of faces etched with the signs that age and pain engrave on one’s face. Önürmen’s vertically stacked Imagefall group introduces a technological spin that offers a variety of pictures from daily life, as seen online via Instagram. The subjects embrace a casual headshot of two kids, a posed snapshot of a couple set against a sunset at the beach, and a performing gymnast, among others.

The artist employs overlapping planes to recreate reflected light, and in doing so, realizes the visual aftereffect of exposure to bright light. Önürmen’s creative scope is rich; he succeeds in diverging from his interior focus by extracting the online images to better realize the everyday concerns of a broad spectrum of humanity, from the profound to the mundane. While many works represent serious subjects, others feature only a pair of sneakers or a handbag. The artist’s softly blurred, separated layered tulle sculpture features whimsical cutout shapes with natural underpinnings, whose airy exuberance evokes a bright, playful condition. 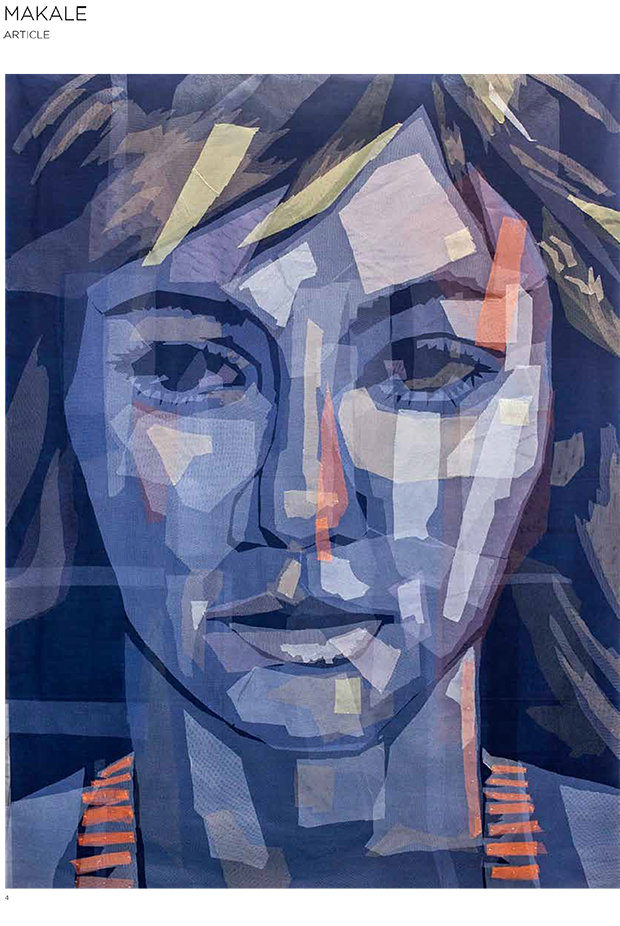 Önürmen’s obsession with replicating emotionally charged, confrontational interactions is enhanced by his evocative use of layered tulle and painted pixel-like squares. The pixels incorporate a hint of technology into a personal worldview rife with memory, loss, and regret. In Listening, 2013, the large-scale heads of a man and a woman are represented in a conversation where the man is apparently the listener. With closed eyes and solemn visage, he seems penitent. Two Women is similarly strewn with pixels and tulle, but is more perplexing. In both works, the subjects seem engaged in heated dialogues over unresolved issues. Applause is a veiled, rapturous work whose forms appear to float between an indeterminate foreground and the deep space behind. The paintings evoke a reality marred by tragic memories; some of his works are reminiscent of the realist phase of Gerhard Richter’s painting oeuvre.

Önürmen’s F Series of abstracted figures enmeshed in modulated spatial grounds comprises another group of cryptic paintings. The forms appear to move forward in an essentially indeterminate terrain.  In the artist’s moodily evocative T-Series-2paintings mingle blurred architectonic forms, redolent of shadowy doorways and darkened windows. They feature slender, solid lines that carve the surface space, infusing heightened tension to the pieces without shattering pictorial unity. Some of the paintings conjure time-lapsed photography, thereby reinforcing the impression of many media at play. This amalgam manages to recreate the overloaded consciousness of city-dwellers confronted daily with moving urban forms that only just avoid collision. The exhibition is perhaps best summed up in the words of Percy Bysshe Shelley, “Lift not the painted veil which those who live call Life.”