When Leila asked me and Beth to curate the inaugural show for her new gallery we were both flattered and excited. Leila explained that she was opening a new gallery on 57th Street and that it would involve 16,000 square feet on six floors one of which contained just a screening room with 60 seats. The actual location and space were exciting in and of themselves.

In 2014, returning to 57th Street is a bit subversive. It was the center of the New York art world for years before SoHo, the East Village, Chelsea and the Lower East Side fractured the geography of the New York art word. Perhaps returning to 57th Street and the Upper East Side is the most radical move a gallery can make in terms of pioneering a new space or in this case reinventing one. Major galleries have remained in Midtown and the Eastside and maybe now is the time for a return to these spaces as rents and availability have leveled the real estate playing field.

The project became more intriguing as Leila described the size of the space. Curating a show for 16,000 square feet over six floors as well as Leila’s downtown space suggested a venue that approached a show scaled to a museum like space. An exhibition of this size could be like a large museum survey show and offered the opportunity to be a celebration of the energy and talent within the art world and art history.

For this reason Leila asked us to curate a show of portraits a subject that had been approached by artists throughout art history. As we made a list of potential artists Beth suggested that we call the show Look At Me: Portraits from Manet to the Present. The title calls into question what is the point of view of a portrait. Should we focus on the artist and their approach or should we be drawn into the sitter as the significant personality? As we developed the show we found that across history and evolving artistic styles the emphasis can change from piece to piece.

With the help of Leila and her gallery Beth and I selected a group of works that we hope will demonstrate the evolution of the subject throughout history as well as new vocabularies in portraiture that are being explored today. As we moved deeper into the project we saw how portraits are not simply records of the sitter’s features. Portraits can be crisp renderings of the subject and perhaps those articulated with photography capture the most straightforward representation but even here the artists have license to move beyond a snapshot to more evocative or suggestive representations of the sitter.

Portraiture can certainly idealize the sitter to the point of propaganda and what the image represents transcends the sitter’s actual features. The portrait speaks to a heavier handed rendering packed with sweeping ideals that verge on a symbolic rendering like the Statue of Liberty or any campaign poster.

As we surveyed possible works we found that these fictions can snowball into images that are entirely made up in the artist’s mind and delivery. Historically, artist and sitters sought a more flattering and idealized image but as the 20th and 21st centuries unfolded the artist started to deconstruct the ideal. Gradually the portraits became symbols of the sitters rather than actual records.Commissioning a portrait in the 20th century became a somewhat dangerous exercise in checking your ego at the door as artists approaches became more and more abstract. A person could be rendered with expressive brushstrokes or collaged elements that stood in for what the sitter actually looked like. Eventually even photography questioned the value of a realistic portrayal of a person.

Modernism seemed to jettison a John Singer Sargent approach that flattered the sitter with elegantly abstracted feathers and satin in favor of a field of artists like Lucien Freud and Alice Neel that rendered the sitters features with thickly applied paints or generalized brush strokes. 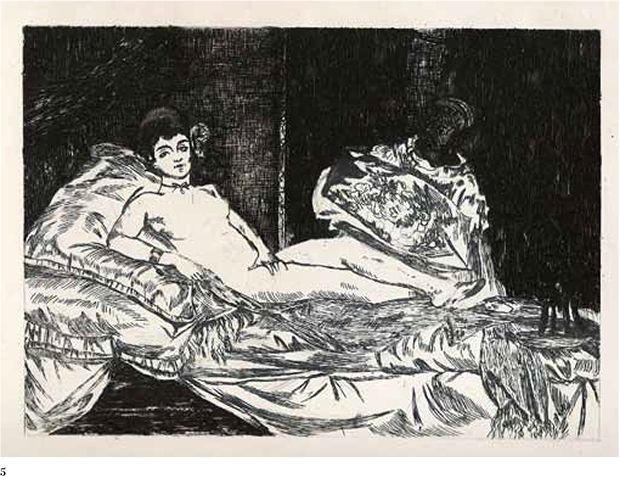 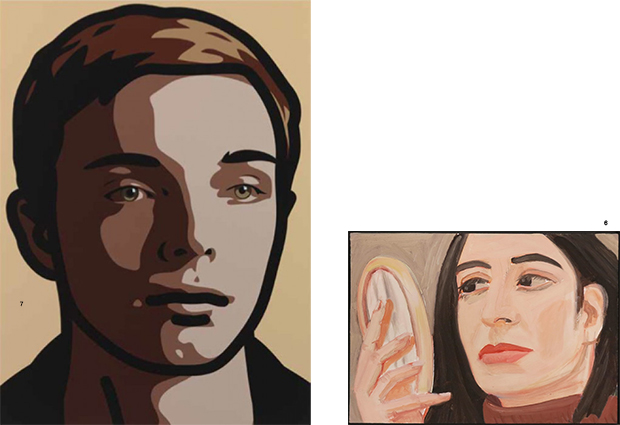 While selecting works for the show I came across a photo of the an interior of Chatsworth in England. On the wall was the enormous portrait of the Acheson Sisters by John Singer Sargent, and beneath this avalanche of satin and feathers was a small portrait of the Duchess of Devonshire rendered in a comparatively less forgiving manner by Lucien Freud. The scale and somber quality of Freud’s painting though trumped all the exuberant flourishes of Sargent’s work with deeply felt strokes offering not so much a likeness of the Duchess’ features as much as a glimpse into her mood.

By the time this photo was published our eye for beauty and idealization had shifted and was now evolving at an increasing rate towards what a person is and not so much how they looked. By the time I had discovered this image Andy Warhol had perfected a hybrid approach to portraiture that bridged the gap between conventional polished beauty and that of an increasingly unflattering and abstracted strategy to capturing a sitters image. Warhol fused a photographic image with broad expressionistic strokes of a Pop Art infused palette. The resulting works were some of the most glamorous portrayals of movie stars, artists and collectors since Sargent. They were a perfect mix of vanity with concessions to modernism.

As the 20th century rolled into the 21st portraiture along with every other subject that artists approached joined a post modern mash up and the playing field for techniques and materials was leveled. An Alex Katz painting of elegant dancers is as culturally significant and beautiful as a moody Mapplethorpe photograph that reduces a sitter to shadowy tones and classical shapes. Within a post modern field symbolic portraits gained momentum and works like Felix Gonzalez -Torres’ sculpture of candy piled against a corner that in its perfect state is the exact weight of Torres’ lover before he died. This presence and absence is just as arresting as a sadly glamorous Warhol painting of Marilyn Monroe. The viewer is asked to construct an image of the subject in their mind. Here a realistic image does not represent the subject as deeply as an abstracted sculpture demonstrates the love this person engendered in another. These feelings strike closer to an accurate image of a person that than any realistic likeness.

Torres pushed the boundaries of portraiture further by allowing the viewer to take away one of the candies from the pile. In this way the viewer carried a part of the portrait of Torres’ friend with them and at any moment the candy could be used a way to conjure the viewer’s perception of the man for which Torres cared so deeply.

Well into the teens of the 21st century Beth and I have found that portraits have and continue to take many forms and hopefully when you see Look At Me you will experience the same energy that Walt Whitman described as he walked the streets of New York – a sort of giddiness provoked by the stream of faces and returned glances. Some held and studied and some furtive to the point of abstraction the sum of which suggest the lush variety of approaches to portraiture from Manet to the present.